Types of Flywheels- A Comparison

Recently, we discussed the history and basic workings of the Flywheel UPS system, but did you know that there are also several different types and configurations of these systems? This article goes into more detail regarding the three main styles of Flywheel UPS.

Conceptually, this system is simple. A rotor is suspended by magnetic bearings in a vacuum chamber, connected to an electric motor and an electric generator. The rotor accelerates to high speed in a drum and maintains its rotational energy until that energy is ready to be used. When the energy is released, the rotational speed of the flywheel is reduced. Adding energy increases the speed of the flywheel. Most FES systems use electricity to accelerate and decelerate the flywheel.

Flywheel UPS systems are typically better at operating in harsher environments, where they can help “smooth out” power disturbances. They are often seen in Manufacturing, Oil and Gas Industries, and even some science labs, where large energy charges need to be released in short bursts. These are all examples of a good use for a flywheel UPS.

This is often the most popular type way a flywheel is used as a UPS. It is built on the same type of technology and footprint of a standard static UPS system, but in place of the batteries, a flywheel is used to provide run-time and power conditioning to the DC Buss of the UPS unit. This system is typically marketed as a way to eliminate the need for batteries and, as a result, decrease costs.

However, businesses that require a longer ride-through for power system outages, will look to either additional flywheel units, or will integrate batteries in addition to the flywheel to increase their run-time in the event of a generator failure or other issue.

A DRUPS combines the functionality of a flywheel protected UPS with a diesel generator. 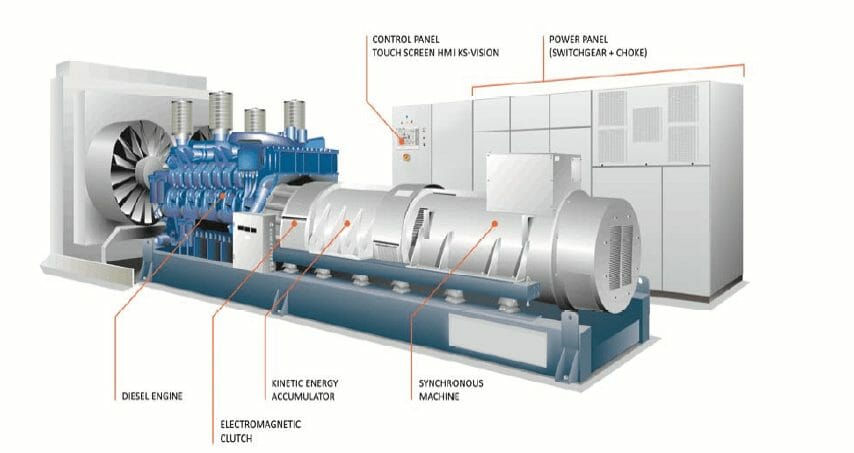 When combined with a reactor or a choke coil, the generator also works as an active filter for many power quality problems, such as harmonics, RFI, and frequency variations. When the utility or main power source fails, energy released in the flywheel drives the electric generator, which continues providing power without interruption. At the same time, the diesel engine takes over the flywheel to drive the electric generator to make required electricity. The flywheel continues to support the generator to keep a stable output frequency.

Because of the unique design of coupling the flywheel with the generator, there are other advantages too, including the ability of the flywheel inertia to start the generator in the event of a failed battery or other starting component failure, similar to how one would clutch start a manual vehicle.

The DRUPS are often seen in larger manufacturing and automation environments. They can be used for niche applications in military and industrial work. It is like a mini “power plant” for the company using it. In addition, they are becoming more popular in data centers and IT environments where space is a premium. 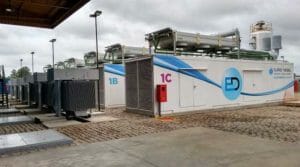 Maintenance on a flywheel UPS environment is recommended at least twice a year. Quality Power Solutions has proven experts that can make designing and maintaining the right solution easier for you. Contact us today to find out more about how we can help!

Intro to the Flywheel UPS: Powered by Motion